Why are questions asking for personal opinions (opinion-based) off-topic?

I would like to understand the reasons why questions asking for subjective opinions such as personal approaches for learning Chinese (see for example Is it common to learn individual characters before two-characters words? ) are discouraged and closed in Chinese SE.

I understand questions asking for opinions of sensitive topics (such as politics, religion, etc.) are discouraged and maybe closed, but I believe other opinion-based questions can benefit greatly other users, even if there is not a unique objective solution.

Basically, blackgreen has done a fine write-up concerning opinion-based questions. However, the linked question is not only problematic because it's opinion-based: it's also not about the Chinese language, but rather about study methods, so it's also reasonable to close it as off-topic.

I envisage on/off-topic-ness as a kind of Euler diagram: 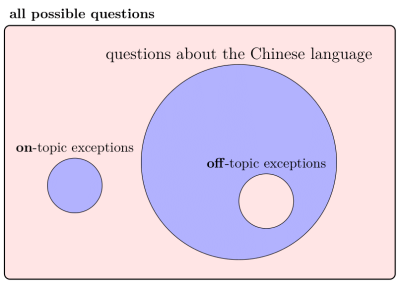 This site is meant to be about the Chinese language: this is literally the name of the site.

Don't ask about... Anything not directly related to the Chinese language
Chinese.SE tour page

Thus, a primary determinant of on/off-topic-ness is the answer to is it about the Chinese language? We might encounter questions phrased like:

I'm studying Chinese and I have a problem; can you help me?

These questions tug at our heart strings: we're also studying Chinese and desire to help. But what the OP is doing with their life doesn't actually affect whether their question is on/off-topic.

There are two kinds of community-defined exceptions:

Realistically, these exceptions are poorly defined currently; closure is sometimes based on the "instinct" of whoever happens to be around at the time, and not community consensus. (From the two surveys, Chinese-to-English translation went from on-topic to off-topic, and it seems now it's on-topic again. [And it seems to vary with the length of the snippet.])

For these two kinds of exceptions, we ideally should be able to link to a meta post establishing consensus on each family of questions. The fact that we don't have this right now is an issue we should strive to fix: we need to create meta posts to identify these exceptions.

Without having established questions about "study methods" as an on-topic exception via a meta post, it's reasonable to close it as off-topic.

Stack Overflow was born as a Q&A website for software professionals and enthusiasts with the specific and declared purpose of building a repository of knowledge.

Knowledge is the key term here. An opinion might be informed by knowledge, and transmit knowledge, it might be well-written and contain enough practical information that it translates into actionable knowledge, but this is rare. More often than not an opinion is just that, an opinion.

The typical opinion-based question in programming is:

Can you recommend me an X to do Y?

To build knowledge, you need objective, verifiable, evidence-based answers. If an answer does not meet these criteria, it does not contribute to building knowledge. It contributes to forming opinions, that may make sense to you, in your specific case, according to your specific background, and be complete nonsense to someone else.

So questions that elicit opinion-based answers are not useful to build a repository of knowledge.

But make no mistake, nobody is saying that opinion-based Q&A is useless in absolute. It's simply not a good fit for the Stack Exchange network and its declared mission.

Now, the question you linked can be seen as opinion-based exactly because of this. In order to answer "Is learning characters individually first the most common way to go about it?" with facts, you would have to provide references to researches that analyze a statistically significant number of language courses (or similar entities) and draw conclusions about what's the most common way to go about learning characters.

If you do provide such an answer, I will upvote it, encourage others to upvote it, and sing your praises under Mount Olympus with a harp with golden strings.

But the harsh reality is that the majority of answers will not be like that. In fact, you have answers like:

I am a Taiwanese, I think it would be much more difficult to learn the characters individually. Because when you break those common words and phrases apart, the meaning of each single character become more ambiguous. The meaning of each character will be so many more and it will be very confusing.

Answers like this one are devoid of objective value. And as a fellow user of this site, the only thing I can convey by upvoting or downvoting them is whether I have a similar opinion with this person or not. Whereas votes are instead (desperately) needed to make quality content float to the top. But I can't appraise the quality of an opinion.

It follows that I will vote to close opinion-based questions.

Not the answer you're looking for? Browse other questions tagged discussion off-topic .

3
Policy for questions about chinese names' meanings/requests
9
What is the purpose, mission, or goal of Chinese Language SE?
6
Alternative Stack Exchange sites for "not really about the Chinese language" questions
5
Streamlining question closure: approximate roadmap
4
Which topics should be redirected to other SE sites?
3
Why are opinion-based questions being answered by moderators?