Are image transcription requests on-topic? ("What does this image say?")

Currently a proportion of image-transcription questions are closed using the reason:

Questions asking for translations are off-topic unless prior research effort is clearly indicated; we're here to help you learn, not provide a bulk translation service.

And often it's hard to figure out why it's applied to one question, and not another.

Importantly, here I'm talking about image transcription (identifying and writing down characters in images), not to be confused with translation. The OP is asking for the plaintext of Chinese in an image.

Chinese transcription requests are inherently about the Chinese language. So, in my way of thinking at least, they are on-topic by default. Thus, if we are to declare them off-topic, we should explain here on meta why they're off-topic.

Question: Are image transcription requests on-topic? ("What does this image say?")

Please give your thoughts on this; it's important that we clarify these close-reason boundary regions.

We need users to cast close votes. We thus need close reasons designed around what users generally agree should be closed. But to get there, we need more user participation on meta.

Currently we have Image-only questions should be closed as off-topic but it's sporadically implemented.

This is what I'm thinking at the moment...

Closing these questions is currently done inconsistently, with e.g. 1 and 2 being closed and many others left open. I feel this unpredictable question closure is unfair to the users of the site. "Why was my question closed when many others were not?" Honestly, I don't know the answer, and I'm a mod here! Bad luck, perhaps?

The often-used close reason given is

Questions asking for translations are off-topic unless prior research effort is clearly indicated; we're here to help you learn, not provide a bulk translation service.

But these questions are asking for transcriptions: it's not the same thing. Admittedly, they often ask for translations, like Translation of this script to English please?, yet what immediately obstructs the user is the lack of a transcription.

But surely we must close some of them, right?

Some answers to transcription-request questions are interesting and educational, while others are not. Probably the most meaningless one I've seen thus far is "What does this Chinese CAPTCHA say?" (which isn't closed (!!)). I get the feeling that what users don't like are meaningless and tedious questions like:

There's no significance to the answers. It's pointless. It's a waste of time. And there's an infinitude of such questions: I could go outside and take a photo of almost anything and create a meaningless "what does this image say?" question. This makes me feel like we need some kind of baseline. And the baseline should be more about "significance" and "interest" than "effort shown".

I'm starting to feel the boundary should be Does anyone (other than the OP) care about what's in the image? Suppose a user took a photo of Tiananmen square, and asked "What does this say?" It's likely of interest to other people.

Do we really need the OP to "show effort"?

If we ask the user to "show effort", the best we're going to get is them editing in something obvious like "I don't know where to start" or "I don't know how to type Chinese". I do not believe this will lead to a better question; I don't recall ever seeing an image-transcription question re-opened after a user "showed effort".

Moreover, I think we all know that going from image to plaintext can be a hard problem, likely impossible for anyone who hasn't studied Chinese, or who doesn't have Chinese input methods on their device, even in very simple cases (like 四). In hard cases, it can be impossible for native Chinese speakers.

I think the "show effort" criteria arose from sites like StackOverflow and Math.SE, where what is omitted fundamentally changes how people write answers. Compare:

If we were to follow "the letter of the law", then e.g. the no-effort question Need translation for painting in regards to who the artist is and what it reads in Chinese calligraphy should be closed. However, it has a score of +2 and an answer with a score of +3. Nobody seems to care that the OP didn't show effort.

How are image-transcription questions being received?

If we look at the character-identification questions (and their deleted counterparts), they are getting upvoted, usually a score of 1 or 2. Some, but not many have a negative score. Moreover, they are even being curated with users editing titles to make them useful and retagging. Clearly, multiple users like these questions enough to upvote them and answer them. (Oh, and these are not my upvotes.)

Because their answers are sometimes simple, answers often come in very quick, before closure. And even if they are closed, the author's often get answers in the comments anyway. I don't think we have a "too easy" threshold, and honestly, I don't mind some low-hanging apples to give new users more chances to participate.

Is the cure (closing them) worse than the disease (answering them and moving on)?

When there are multiple users here who are actively upvoting, maintaining, and answering such questions, I think it's time we thought about officially declaring such questions on-topic, except when they're virtually meaningless, like "What does this Chinese CAPTCHA say?" or when the image is blurry to the point of being unreadable. (Note: This is not an official announcement; this is a request for feedback.)

When a class of questions are being arbitrarily closed, it leads to unfairness and disharmony. This needs to change.

Aren't we meant to be optimizing for pearls, not sand? The reality is that sometimes these questions lead to good answers. If we close them as off-topic we lose the pearls along with the sand.

Is the site going to be flooded with transcription requests? I'm not sure. Maybe this is a risk. If we just quickly answer them, perhaps they'll quickly just drop off the front page. At the same time, the question rate here is quite low.

Update: This Data Explorer query (thanks to Glorfindel) shows that 70% of users of the character-identification only ask a single question at the site.

@Becky李蓓 Does the OP show any interest in learning the content/context of the art piece, or simply requesting the "word recognition and translation" service?

That's a fair point: these once-off "what does this say?" questions seem... pointless. Especially in large numbers. Especially if the OP doesn't care (much) about the answer.

Update: This is what I'm thinking at the moment. There are three roles here:

Unfortunately, voting and responses in Meta Chinese SE is too low to really determine what this community feels about image transcription requests. I've stuck to the general idea at "What does this say" type question policy for seals and calligraphy, and have persistently voted to close questions asking for transcription of regular script and its derivatives, such as Ming typeface or Imitation Song, as almost none of them "show effort" (to a reasonable extent; questions like What is this written on several buildings in red paint? are among the rare ones which do actually show effort).

My decision-making process on whether to close such questions is something like the following, where if all of the following answers are "no", then I vote to close:

It'd be nice if the community

A reminder: Off-topicness of a question is independent of up or down-votes. Personally, I haven't upvoted an image transcription question (even for seal/calligraphy identification) for a very long time, due to the lack of effort shown in the vast majority of them. The last one I remember upvoting is Translation of seal script text.

EDIT: A mockup of a closure reason for character identification separate from translation: 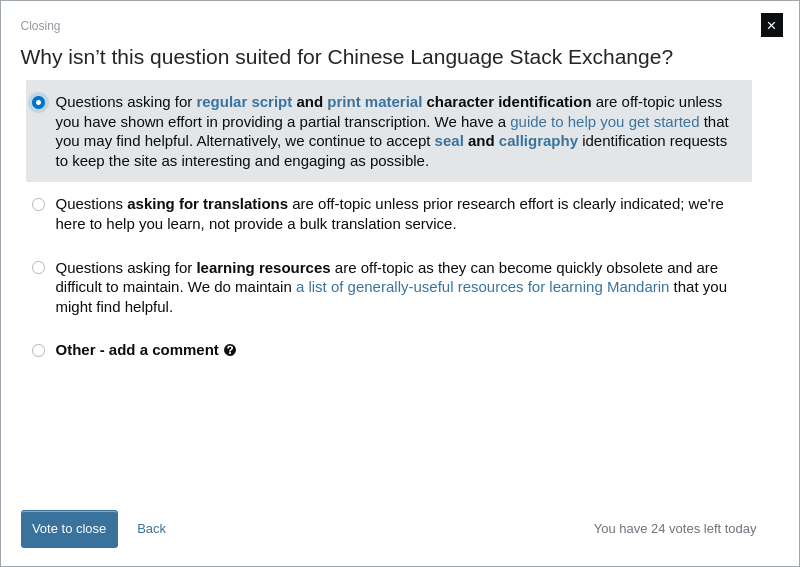 Are image transcription requests on-topic? ("What does this image say?")

may i suggest yes, provided the question fulfils one of the conditions:

a. the text is in

b. the text is on a painting, or artefact

c. the text is culturally interesting

well, the google translate is . . . not workable for classical / literary chinese.

last, no matter the result of this discussion, would the moderators close questions in doubt; or, reopen closed questions, according to the agreed criteria? that, people using searching engine would have a better, standardised results, so they have idea to ask a permissible question.

For easy reference, these are the closed questions with the character-identification tag:

These are the deleted questions with the character-identification tag:

There are also questions which didn't get the character-identification tag which are closed:

as a couple of examples for each.

Not the answer you're looking for? Browse other questions tagged .

6
relaxing the rule of "asking for translations are off-topic"
6
Streamlining question closure: approximate roadmap
5
Image-only questions should be closed as off-topic
3
What can we do about the useless titles of "what does this say?" translation questions?
1
"What does this say" type question policy for seals and calligraphy
2
How do we decide if a question is on/off topic?
1
17 examples of image-transcription requests: how on/off-topic are they?
0
Let's look at replacing the custom close reasons

8
What translation questions are on topic for this site?
5
Image-only questions should be closed as off-topic
1
"What does this say" type question policy for seals and calligraphy
6
Streamlining question closure: approximate roadmap
1
Why is "What are some modern chinese girl names?" receiving answers instead of votes to close?
3
Are requests for resources on-topic?
1
17 examples of image-transcription requests: how on/off-topic are they?
0
Let's look at replacing the custom close reasons