I noticed that when the Chinese characters are shown in headlines and other places sometimes my browser (Firefox 8 on Windows 7) is mixing and matching fonts in order to fill in the right characters.

This happens because the browser tries to find installed fonts based on what language it suspects the characters are. And for some reason Firefox prefers Japanese to Chinese, thus breaking the rendering of the Chinese characters.

Otherwise, a webfont might have to be used in order to ensure that a particular client has support for the font in question, but that web font would need excellent coverage of the Hanzi range.

Edit: Some answers seem to suggest that I may be dealing with a faulty set-up. Let me re-iterate:

Edit: When Firefox has lang=zh set, the headline font selection is the same as Chrome's:

This looks better but is not perfect in my opinion, because it's using a serif font in a sans-serif headline.

Edit 2: I have verified that this bug still exists in the new Beta theme.

I am using Ubuntu Linux with Chrome browser. The Chinese characters in the headlines are bold. This means that any complex characters become simply blue splodges with no discernible detail that would allow the character to be read easily. See the screen shots below for examples:

While I recognise that this site is still in beta, if it is to transition out of beta, the theme designer would do well to choose a non-bold font weight for the headlines.

Not all fonts possess all characters... We should find a font that is spread enough (or alternatively choose a free one and maybe link it for download) and that has a high support and stick with it.

To fix this in Firefox, you need to do two things:

You're set now, everything should display beautifully, with Chinese defaults, and without affecting your main language.

As a comment on the status-declined flag, I want to clarify that this is not a browser bug.

Some Unicode characters have different shapes for different languages. Yes, those are characters with the exact same code point, yet they have different shapes. The browser can only make the correct choice on what to display (what font to use) if it knows the language of the website. When the website specifies no language (or doesn't specify Chinese or Japanese specifically), the browser falls back on a default choice. For Firefox, the default is Japanese. For Chrome and IE, it's Simplified Chinese. Once again, this is not a bug, just a difference in the default fallback.

The solution is for the website to specify a language explicitly. If StackExchange does not specify the language for Chinese character text on websites such as Chinese.SE and Japanese.SE, one of them will always render wrong in some browser. 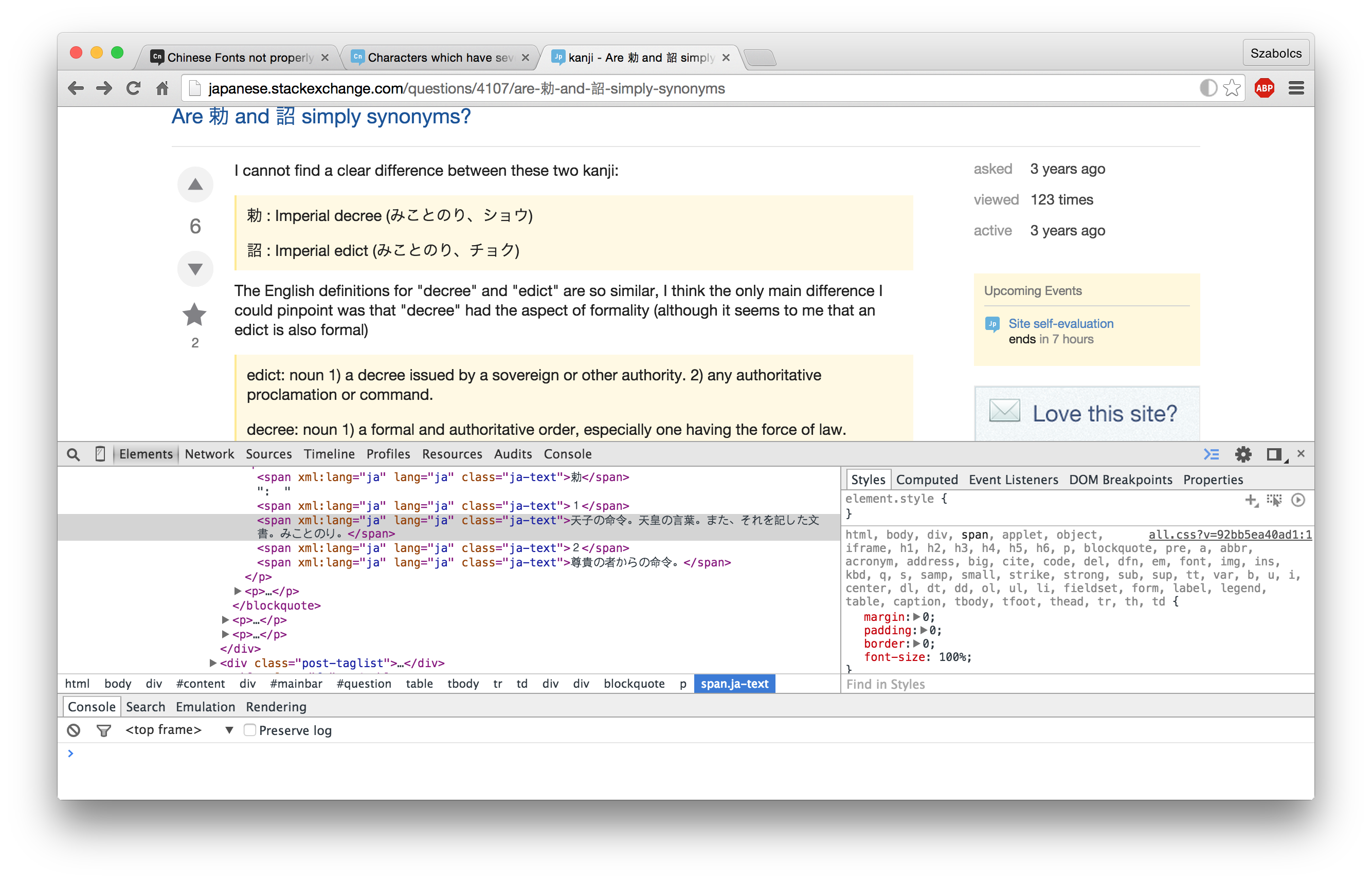 This script is responsible for the language tags on Japanese.SE. From the script source:

I do not have this problem, I use Mac OS X 10.7, tested on Safari/Firefox

Dont' think this is a bug on the site's side - probably a setting in your browser/computer. I actually bumped into this problem and asked a question about it... Some characters look different handwritten and on the computer - how to learn the differences?

@Jin may weigh in at some point, but this isn't really an issue we can fix easily. Firstly, it appears that only Firefox does this wrong. Secondly, every Chinese site has this issue because of the sad state of Chinese fonts available (apparently).

It looks like there are a pretty good selection of free fonts here: http://www.justfont.com/fonts/. I'm can't read Chinese, but this one looks nice to me.

I'll check on the idea of font embedding and update this answer when I can say something more definitive.

Update: We've given this a bit more thought and research, and unfortunately the final result is that we're not going to do anything about this. The truly right answer is that users simply have to configure their own fonts if they want it to work correctly. However, that being said, we often try to find workarounds so that our users don't have to be expert sysadmins to get a decent experience.

As I mentioned above, font-embedding won't really solve the problem. The other idea was to try to make use of the lang="zh" attribute. The problem with that approach is that attribute is supposed to specify the language for the page (if used in <html>) or the block or span-level tag. It won't work for blocks/spans because all the places where this comes into play are user content, and it's incorrect for <html> because the language for the page is still English. It's not a good idea to trade one browser's incorrect handling of font selection for potentially other browser's incorrect handling of language detection.

I'm sorry to not be able to give you anything better, but this is really a Firefox bug that they need to fix.

Not the answer you're looking for? Browse other questions tagged bug status-declined design .